As announced by NAMA´s Joint Venture partner Red Rock Resources Plc. on the London Stock Exchange on 8 January 2012, NGL was expected to issue 35% of its shares so as to bring Red Rock’s shareholding to 60%. NGL has now advised that it will issue and allot to Red Rock sufficient shares in NGL to raise the percentage holding of Red Rock in the issued share capital of NGL from 25% to 60%. 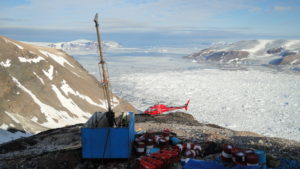 From site at Melville Bugt